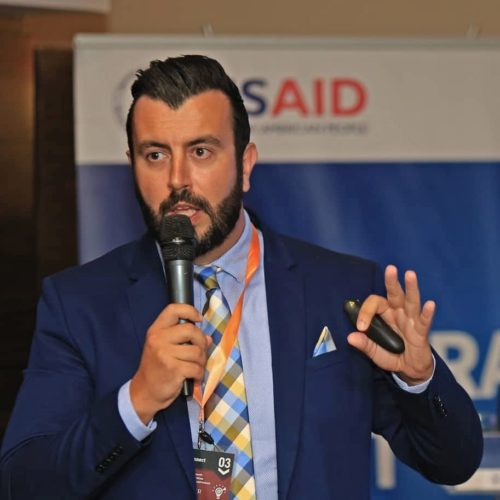 Edhem ‘Eddie’ Custovic by day is an engineering academic at La Trobe University, Australia and the founder/director of the La Trobe Innovation & Entrepreneurship Foundry (LIEF). He is a business owner, entrepreneur, thought leader, mentor, philanthropist and a global citizen. Eddie was born in Bosnia & Herzegovina and lived for extended periods in Switzerland and Germany before migrating to Australia. His multicultural background, multilingualism and ‘borderless’ approach to work enables him to take a politically and culturally sensitive perspective on life, volunteer roles, and professional career.

In 2015, with the culmination of first-hand experiences and passion to help those in need, he founded the Bosnia & Herzegovina Futures Foundation. The foundation’s vision is to break down ethnic division in his homeland through a simple approach of empowering youth through education, technology access and leadership development. Custovic is widely credited for changing how the 1.5 million strong Bosnia & Herzegovina diaspora are viewed by the residents of the same country from ad-hoc financial injections to knowledge bearers and the empowerment of the next generation of thinkers through the diaspora industry mentoring program.

Custovic is highly regarded for drive and leadership that have led him to become one of the youngest senior leadership and board members within the IEEE, the world’s largest professional organisation. He currently serves as the Chair of the Industry Engagement Committee where he engages with C-level executives and Fortune 500 organisations on a regular basis. In 2015, Custovic was recognized for his outstanding leadership and received the IEEE Young Professionals Achievement Award. He is considered by youth as the go to person for mentoring, career development, industry experience, and life coaching. As a result, he was recognized by the University leadership and awarded the Vice Chancellor’s Award for “Supporting Student Employability” in 2015 and was named Employability Champion by the University in 2018. He is a tireless ambassador for STEM education and this is evident through his continued work to bridge the gap between primary/secondary/university education and industry.

All Sessions by Eddie Čustović