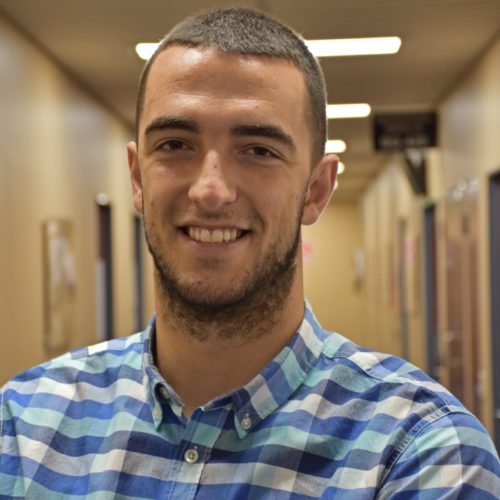 Momčilo Amović is a young, ambitious and passionate engineer who has highly admirable work ethic that has been recognised by his peers. He was born and raised in Sokolac, small town on the Romanija mountain. After graduation from high school he moved to East Sarajevo and started his higher education at the Faculty of Electrical Engineering where he graduated in January 2018.

He has been a member of Bosnia Herzegovina Futures Foundation for two years and is currently the coordinator for the Outreach Program and Volunteering activities. During his short career he has been involved in many different projects and internships. He spent five months in USA during his studies in 2017, gaining valuable leadership experience in an international setting.

In 2018, Momcilo spent three months on professional development at La Trobe University,Melbourne, Australia. During this time he worked in the La Trobe Innovation & Entrepreneurship Foundry (LIEF) developing what is now the BH Futures Foundation high school outreach program based on the Arduino. Momcilo made vast contributions to research and development projects and focused on technical trials of cutting edge IoT devices as part of a large scale Smart City project. He also spent significant time working in the Centre for Technology Infusion (CTI).

During his studies he completed two additional internships at K-INEL in East Sarajevo and LANACO company in Banja Luka.
Currently, Momčilo is a full stack developer working for Bosnia & Herzegovina’s largest IT company, LANACO based in Banja Luka. He has rapidly developed deep technical knowledge and is recognised in LANACO as a rising star with strong leadership capabilities.

All Sessions by Momčilo Amović